The Food and Agriculture Organisation (FAO) has said that two million animals have been lost to a “devastating” drought in Ethiopia.

The UN agriculture agency said that the drought had devastated herders’ livelihoods as it exhausted pastures and water sources.

It said the current food and nutrition crisis was significantly aggravated by the severe blow to pastoral livelihoods. “For livestock-dependent families, the animals can literally mean the difference between life and death – especially for children, pregnant and nursing mothers, for whom milk is a crucial source of nutrition.

“With up to two million animals lost so far, FAO is focusing on providing emergency livestock support to the most vulnerable pastoralist communities through animal vaccination and treatment, supplementary feed and water, rehabilitating water points, and supporting fodder and feed production”. FAO stressed that supporting the herders to get back on their feet and prevent further livestock losses was crucial in the Horn of Africa country, where hunger had been on the rise. “The drought has led to a significant number of animals dying or falling ill, particularly in the southern and south-eastern regions of the country, as other areas recover from previous seasons’ El Niño-induced drought,” the UN agency warned. It also said that drought-hit pastoralists were facing reduced milk production, rising malnutrition, and had limited income-earning capacity and severely constrained access to food. Abdoul Bah, FAO deputy representative in Ethiopia, said “some 8.5 million people – one in 12 people – are now suffering from hunger; of these, 3.3 million people live in Somali Region. “It is crucial to provide this support between now and October – when rains are due – to begin the recovery process and prevent further losses of animals. If we don’t act now, hunger and malnutrition will only get worse among pastoral communities.” According to Bah, by providing supplementary feed and water for livestock, while simultaneously supporting fodder production, FAO seeks to protect core breeding animals and enable drought-hit families to rebuild their livelihoods. In addition to FAO-supported destocking and cash-for-work programmes to provide cash for families, he said animal health campaigns would be reinforced to protect animals, particularly before the rain sets in – when they are at their weakest and more susceptible to parasites or infectious diseases. Bah said FAO urgently required $20 million between August and December to come to the aid of Ethiopia’s farmers and herders. “FAO has already assisted almost 500,000 drought-hit people in 2017 through a mix of livestock feed provision, de-stocking and animal health interventions,” he said. The support was courtesy of the Ethiopia humanitarian fund, Switzerland, Spain and Sweden through FAO’s special fund for emergency and rehabilitation activities, the UN central emergency response fund, as well as FAO’s own early warning early action (EWEA) fund and technical cooperation programme.

Do not use any information on this site for life or death decisions. All information is intended as supplementary to official sources. Kindly refer to your country’s official weather agency/government website for local warnings, advisories and bulletins.

Around 4.5 million Ethiopians could be in need of food aid because of a drought in the country, the UN has said. Hardest-hit areas are Ethiopia’s eastern Afar and southern Somali regions, while pastures and water resources are also unusually low in central and eastern Oromo region, and northern Tigray and Amhara districts. Reacting to the UN’s claims that the number in need had increased by more than 55 percent this year, Alemayew Berhanu, spokesman for Ministry of Agriculture, told Al Jazeera that Ethiopia had “enough surplus food at emergency depots and we’re distributing it”. “When we were informed about the problem, the federal government and the regional state authorities started an outreach programme for the affected people,” he said. In August, the Ethiopian government said that it had allocated $35m to deal with the crisis that has been blamed on El Niño, a warm ocean current that develops between Indonesia and Peru. The UN says it needs $230m by the end of the year to attend to the crisis. “The absence of rains means that the crops don’t grow, the grass doesn’t grow and people can’t feed their animals,” David Del Conte, UNOCHA’S chief in Ethiopia, said. One farmer in the town of Zway told Al Jazeera that he was selling personal belongings to stay alive. “There is nothing we can do. We don’t have enough crops to provide for our families. We are having to sell our cattle to buy food but the cattle are sick because they don’t have enough to eat,” Balcha, who has a family of nine, and grows corn and wheat, said. The onset of El Niño means the spatial distribution of rainfall from June to September has being very low. According to the UN children’s agency (UNICEF), the El Niño weather pattern in 2015 is being seen as the strongest of the last 20 years. Experts say it could be a major problem for the country’s economy, as agriculture generates about half of the country’s income. Climate shocks are common in Ethiopia and often lead to poor or failed harvests which result in high levels of acute food insecurity. Approximately 44 percent of children under 5 years of age in Ethiopia are severely chronically malnourished, or stunted, and nearly 28 percent are underweight, according to the CIA World Factbook. UNICEF says that about 264,515 children will require treatment for acute severe malnutrition in 2015 while 111,076 children were treated for severe acute malnutrition between January and May 2015. 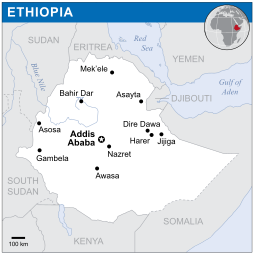 Angola set up an emergency plan on Thursday for the southern province of Cunene, where an estimated 300 000 people are at risk of malnutrition because of a two-year-long drought.

“The plan seeks to immediately provide medical assistance, food and drinking water for the most needy populations,” the cabinet’s economic commission said in a statement. Cunene, a semi-arid province which shares a border with Namibia to the south, depends largely on subsistence farming and cattle-raising.

Provincial governor Antonio Didalelwa was cited by state-owned newspaper Jornal de Angola as saying more than 300 000 people, or approximately the entire known population of the province, are at risk of malnutrition.

“We are worried about the situation. There is a lack of food and water for people and cattle,” he said. “The people in the province are going through very tough times because it hasn’t rained for two years and that is harming families, who depend on agriculture and cattle-raising.” Angola, which is roughly twice the size of Texas, suffered heavily from drought last year.
Friday, 10 May, 2013 at 09:10 (09:10 AM) UTC RSOE

…The United Nations Children Fund (Unicef) said that 1.8 million people were affected by a prolonged drought in 2012, including more than 500 000 children.

The UN agency said it has been working closely with the government to ensure the drought does not result in malnutrition.

Angola is Africa’s second-largest oil producer, after Nigeria, but is still recovering from a 27-year that ended 11 years ago and which devastated most of its infrastructure.

President Jose Eduardo dos Santos, who has been in power since 1979, has promised to improve social conditions and better distribute Angola’s oil wealth during a new five-year term he secured in an election last year.

His government said on Thursday it would use budget funds to minimise consequences of natural disasters in Cunene.”